He is a member of many national and international societies including International Continence Society (ICS), International Spinal Cord society (ISCOS), American Urological Association (AUA), European Association of Urology (EAU), the Society for Infection and Inflammation in Urology, and the European Society for the Study of BPS/IC (ESSIC). He is an active member of various guideline groups on non-traumatic and inflammatory lower urinary tract dysfunctions including panels of the EAU, ICS and the International Conference on Incontinence (ICI).

Prof. van Ophoven’s clinical activities and interests focus on the treatment of voiding and pelvic floor dysfunctions including OAB, urogenital inflammation and pelvic pain syndromes with special emphasis on sacral and pudendal neuromodulation. Patients with refractory pain of the urinary bladder (interstitial cystitis) or of the pudendal nerve (pudendal neuralgia) consult him from all German-speaking countries as well as from abroad. Clinical research and numerous publications on innovative pharmacological and minimal-invasive treatment approaches to these conditions round off his profile. 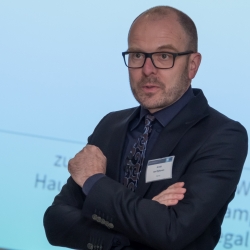