1984 - registered as a urologist in Belgium

1988 - registered as a urologist in The Netherlands

1993 - Fellow of the European Board of Urology

- Professor of Urology at the University of Maastricht since November 1, 1998.

- Chairman and treasurer of the Dutch Study Group on Neuro-Urology

- Member of the Board of the SUBDIMS (Study Group on Sexual, Urological and Bowel Dysfunction in Multiple Sclerosis)

- Board Member of the European School of Urology

- Member of the Editorial Board of 6 scientific journals

Biographical Sketch  Philip E.V. Van Kerrebroeck, MD, PhD, was born in Louvain (Belgium) in 1953. After obtaining a medical degree from the University of Louvain in 1978, he trained in General Surgery and Urology in Belgium and The Netherlands. Registered as a urologist in 1984, he received the masters degree in medicine from the University of Antwerp (Belgium) in 1992 and the Ph.D. degree in medical sciences from the University of Nijmegen, The Netherlands in 1993. Since 1993 he is Fellow of the European Board of Urology. He is Professor of Urology at University of Maastricht and iworks as clinical urologist in the Maastricht University Medical Center. He has a long standing clinical interest in fFnctional Urology (LUTS, Nocturia, Urinary Incontinence) and the treatment of neurogenic bladder dysfunction. His research interests are the development of various new therapies in Neuro-Urology such as neuromodulation for lower urinary tract dysfunction. He was principal investigator for several international trials follow GCP rules. 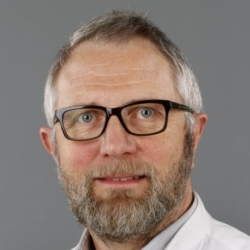